OOPS! Sorry this story isn't available at the moment.

Case Study: Made to measure: the lockdown clothes recycling campaign

With Recycle Week coming up (21-27 September), here is how Brent Council’s household clothes recycling collection was supercharged to the tune of half a tonne of textiles in a month thanks to digital advertising.

Spring-cleaning in lockdown – everyone was at it. With more time at home than usual due to the COVID-19 pandemic, people had taken to turning out their storage spaces for the first time in a long time. Then there was the question of what to do with the mounting piles of recycling when high street charity shops were still closed? 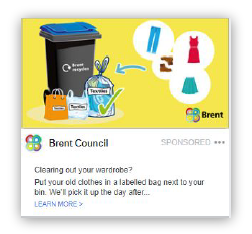 The London Borough of Brent Council and its recycling management partner Veolia had already reviewed the way it collected textiles earlier in 2020, to enable a greater quantity and quality to be picked up directly from households. It seemed like the perfect time to communicate with residents and reboot this service, so unwanted clothes didn’t end up in the general rubbish.

Veolia Brent teamed up with textiles recycling charity TRAID to ensure there was an ethical destination for the clothing collected. TRAID turns textile waste into money and resources to reduce the environmental and social impacts of clothes, encouraging reuse through its shops and funding global projects to improve conditions in the textile industry.

The month-long “Wear not, waste not: declutter and donate” campaign was launched in June.

The message for Brent residents was that if they put their old clothes in labelled bags next to their recycling, these bags would be picked up the day after their next scheduled recycling collection day.

A range of simple creatives promoted this message focusing on a variety of words and phrases – from “clearing out” to “de-cluttering” and from “bag your old clothes” to “don’t waste”. CAN always recommends this approach for digital advertising, as it becomes clear from the numbers of people clicking on each ad which messages resonate best. These ads can then be optimised to get more people engaged with the campaign.

“Wear not, waste not” combined outdoor advertising on poster sites by JC Decaux with digital advertising by us at CAN. The digital ads were geotargeted to the 120,000 residents with Brent postcodes on social media channels Facebook and Instagram as well as on a range of the most popular news and entertainment websites data tells us are visited by locals. Where possible, residents in high-rise estates were excluded from the campaign as the clothes collection service isn’t available for those living in flats so this would waste spend.

When someone clicked on one of the ad formats (which ranged from leaderboard ads that sit across the top of the laptop screen to “sticky” ads anchored to the bottom of a mobile phone screen) they were directed to a landing page on the Brent Council website so people could find out more on the recycling scheme.

As a result of the campaign, the volume of high-quality textiles collected from Brent Borough households went from zero in May to a total of 536kg in June. That meant more than half a tonne of clothes – which equates to around 2,000 items – could be passed on to TRAID to be resold and reused, reducing waste, and raising funds.

The digital campaign surpassed all key targets for delivery too:

Drilling down into the stats gives us plenty of useful information that can be used to build similar campaigns in future and insights into where spend should be directed.

The most popular creative proved to be (unsurprisingly under the circumstances) focused on “clearing out” with almost 1 million (a third of all) impressions and 10,500 (half of all) clicks. “Bag your old clothes” achieved over 900k impressions and 7.5k clicks showing that Veolia Brent’s idea to collect clothes for recycling from doorsteps was a winner.

The most popular channel by far was Facebook with 1.3m (a third of all) impressions and more than 15k (three-quarters of all) clicks. The Facebook ads also received 682 likes and more than 150 comments. Many residents praised the timing of the initiative, with charity shops not yet reopen in June and bags of clothes for recycling littering the streets outside unopen charity stores. Residents were also proud that their council was leading on this initiative.

Even though, across the board, there were slightly more impressions for a male than a female audience (1.27m and 1.23m respectively) the click-through rates were markedly reversed, with 4.3k men clicking through to the landing page as opposed to 14.3k women. With the average click-through rate (CTR) for general display ads online at around 0.35%, the male audience interaction with the campaign at 0.34% CTR was distinctly average, but the female audience was much more interested with an overall CTR of 1.2%.

The below-average response amongst younger women is surprising, with under-24s having a keen interest in environmental issues. Maybe a future campaign needs to include messages focusing on the sustainable and ethical destination of the clothes to capture this age group?

The mobile phone proved far and away the best device on which to reach all people with the campaign: 80% of clicks and 57% of overall impressions were made on a mobile phone. This is a general trend in digital campaigns, although it was no doubt heightened during lockdown with fewer people tied to a desk for hours on end.

Three tips to maximise engagement on your clothes recycling campaign

More help for your campaigns