“Monitoring metrics as the campaign went out live meant we could optimise those messages and platforms working best to get the most from our budget. I could demonstrate where every penny was spent.

Around a million smokers live in London – 15% of the UK’s total smoking population – according to Stop Smoking London, a public health programme that brings together the capital’s borough councils in a bid to get the numbers lighting up down.

Behaviour change is always a tough nut to crack – particularly something as addictive as nicotine. But Stop Smoking London’s latest bid to help residents ditch cigarettes – involving 30 London boroughs running a simultaneous digital advertising campaign with us at CAN for five months to March 2019 – managed to get nine million views on 1.8 million different devices and a huge 26,500 ad clicks, by being savvy about who, how, when and where to target.

You might think anyone clicking on an ad promoting smoking cessation would automatically be a smoker. In the world of digital data, you’d be wrong! Most of them will have a good reason to click, but might do so as a concerned relative, as a ‘social smoker’ (only indulging when out for an evening drink), or as a smoker who isn’t really ready to pack it in. We don’t know for sure.

With no reliable audience data on smokers in London’s population, rolling out an advertising campaign to residents in the capital would have had a large element of ‘hit and hope’ – a bit wasteful on the sort of tight budgets public sector comms teams have to rely on these days. 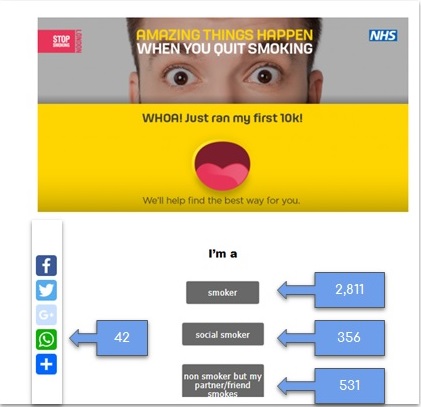 So, we devised a way of building London its own smoker data set. People who clicked on one of the digital ads in this latest campaign were taken to a qualifying page where they were asked to identify themselves as a smoker, social smoker or someone concerned about a smoker.

As we were unsure if being questioned on their smoking status would cause people to abandon the user journey and not end up with support they might need, we ran an ‘A/B’ test. So, half those who clicked were directed straight to the Stop Smoking London website, while the other half got through to the question page first.

This exercise provided a lot of useful information. Even though more people made it through to the campaign website directly than through the qualifying route, those who had taken time to identify themselves as smokers went on to read double the number of webpages on the Stop Smoking London site, spending an average of 1 minute 30 seconds on there (compared to just 17 seconds for the direct group) and were twice as likely not to ‘bounce’ straight off the site.

Stop Smoking London now has an audience of around 3,000 identified (though anonymised) smokers and 26,500 who have shown at least some initial interest in quitting. This is good, solid, reliable data with which to ‘nudge’ people into taking the next step when retargeting with future campaigns.

Having worked out ‘who’ to target, being savvy about ‘how’, ‘when’ and ‘where’ turned out to be a combination of old-fashioned offline research and digital geo-social pinpointing.

Some invaluable insights had been generated by previous smoking cessation campaigns in 2017 and 2018 co-ordinated for London councils by Lambeth Communications, a consultancy set up by the campaigns and comms team at Lambeth Council.

Paul Morris, Head of Business and Creative Development for Lambeth Communications during this campaign, said: “We found it intriguing that around 80% of those who responded to these campaigns did so on their mobile phones. So, we surveyed 500 smokers to find out more, discovering that mobile phone use was a secondary behaviour for them – checking social media and browsing online when they took a smoke break outside at work or, especially, when socialising in the evening.”

This information – along with other research that pointed to the 25-40 age group as most responsive to quit-smoking messages – meant we could test-target London locations in the evening where this group were likely to socialise. This social-geo targeting delivered the highest click-through rate (CTR) of all geo strategies, achieving a CTR of 0.46% (the average for display ads of all kinds is 0.35%).

Getting the balance right with creatives and messaging when you’re trying to change a behaviour is tricky. There is always lots of reasons why people might adopt a ‘bad’ habit, and an equal number of reasons for why they might quit it.

For this campaign, Stop Smoking London had a range of great creatives that were used as display ads plus standalone messages used in Google search that covered a variety of themes. Insights into the psyche of a smoker, through the creatives that prompted the most impressions and click-throughs, were ‘enlightening’ (excuse the pun).

The top performing search headline was ‘Amazing things happen when you quit smoking’ – with more than 800,000 impressions and more than 5,250 clicks (a 75% share of the total) while that message on the display ad showing someone who had completed a 10k run after quitting was by far the most popular creative, with 3.3 million impressions and almost 12,000 clicks.

Less successful was the ‘Quit smoking today to improve health and fitness’ search headline, which by contrast only generated 17 clicks, the same number generated by the ‘Quit today – start saving money’ headline. Although display ads focusing on health issues like bad breath and low libido were a bit more popular, with around 1 million impressions and 2,000 clicks between five different creatives on this theme.

So, the stats seem to show a preference for aspirational messages over anything more practical – an insight that will help define the future tone of campaigns. As will the search terms that generated the most clicks. It’s probably unsurprising to find those actively searching for help to quit had the highest CTRs: with ‘giving up smoking’ at 6.9%, ’quitting smoking’ at 4.0% and ‘smoking cessation’ at 3.7% compared to the average keyword CTR across all sectors which is 1.91% (benchmarking thanks to Hubspot.) The term ‘smoking’ by comparison got a click-through rate of 0.7%.

The average cost per click for the campaign was also significantly reduced, so the more insights gained and acted on, the more you can get for your spend. As Paul Morris says: “Monitoring metrics as the campaign went out live meant we could optimise those messages and platforms working best to get the most from our budget. I could demonstrate where every penny was spent.”

Support your residents to reap the health and financial benefits of quitting smoking through us at CAN:

Council Advertising Network partners: you can place Public Health England digital ads on your ‘house ad’ space free of charge and get the messages running right across your website, whatever residents are browsing.

Both CAN network partners and other councils: for a bigger impact, you can run a Citizen Reach campaign with us on the websites and social media channels your residents use regularly.

Get in touch with us for a chat.