The overall campaign achieved an increase in enquires, which led to a 100% increase in approvals. The quality of enquiries also improved, which resulted in more children being placed."

‘Raising awareness’ is often dismissed as a marketing objective. But it was top of the list of aims for Telford & Wrekin Council when they ran a multi-channel fostering campaign during the last six months of 2016, with CAN responsible for the digital advertising element.

Budget-squeezing at the council during the previous financial year had shone a spotlight on how much was being spent on children in care, so it was important to the fostering team that councillors could see their campaign in action.

That the campaign resulted in more children in care being placed with foster families was a big bonus – and showed just how successfully digital ads can target specific demographics and then follow-up with ‘nudges’ that encourage people who’ve expressed an interest to take the next step. 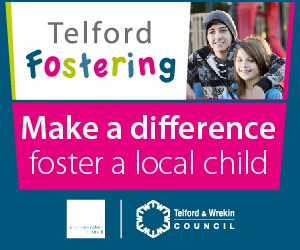 CAN’s specific brief from Telford & Wrekin was to stretch the demographic for fostering to reach out to locals aged anywhere from 30 to 55 years. The creatives were simple and colourful, while follow-up information focused on the benefits fostering brings to carers as well as to children.

From June to December 2016, CAN’s first phase of targeting placed adverts across local and national newspaper websites, as well as on social media, ecommerce and information platforms. This provided an excellent basis to build on. More than 1.25million ad impressions were delivered in total and there were close to 2,000 clicks. So that’s 2,000 people to nudge towards further engagement by retargeting them later.

Residents aged 35- 44 years were most likely to interact with the campaign in this phase – with no real gender bias, and more on mobile than any other platform. YouTube, The Sun and The Daily Mail websites were the top places for engagement. The best time to engage was between 6am and 8am weekdays, and 2pm and 4pm during the weekend.

Taking the next step

The retargeting phase, where those CAN classified as ‘interested’ were shown the ads again as a reminder, got going the week after the campaign began. So, straight away campaign budget could be concentrated on those who had already declared an interest in fostering.

The click-through rate (number of clicks an ad receives divided by the number of times it’s shown) doubled – so the people retargeted chose to take another look at fostering when nudged. Interestingly, this time it was more likely to be the 45 to 54s who interacted. And the best time to engage was between 7pm and 10pm during the early half of the week and at weekends. Again, The Sun and The Daily Mail websites proved fruitful, plus Ebay this time round.

Shirley Wilson, who co-ordinated the campaign on behalf of Telford & Wrekin Council’s Fostering Invest to Save team, said that in terms of recruitment results it was important that the digital ad campaign managed to reach the right people: “The quality of enquiries improved with this campaign, which ultimately resulted in more children being placed. And while it’s hard to attribute success to any one channel, the overall campaign led to a 100% increase in approvals.”

The initial aim to increase awareness of fostering paid dividends reputationally within the council too. As Shirley said: “Awareness of the campaign was high, with elected members telling me they had seen the campaign frequently.”