The CANalytics blogs use statistics gathered from across the partners of CAN’s Council Advertising Network. Originally posted 20 July 2017

We have long known that there is a general usage trend on council websites – volume peaks in the beginning of the week and then tapers off into a trough on the weekend. The difference between the week and weekend is pronounced – council websites handle more than twice the volume on an average working day than they do on a weekend day. This chart shows sessions (pages provide a similar view) per day across the CANalytic network of 50 councils. We can speculate why there is such a significant drop-off over the weekend – people prefer to log in while they’re at work, they’re not normally in front of their screens on the weekend – but it is 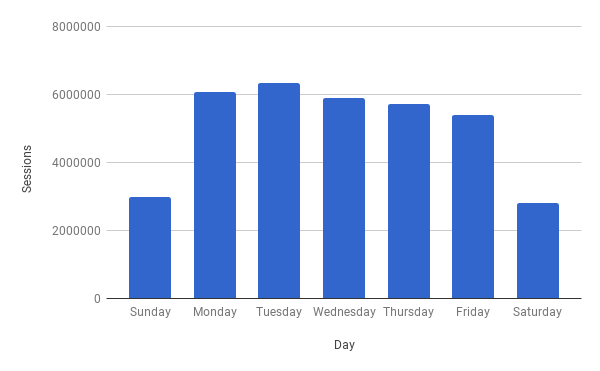 clear that the majority continues to interact with the council in the same time frames they did before it was possible to do so online. An hourly view supports this conclusion – some three-quarters of the total week-day volume on council websites occurs during working hours. Weekend volume is more evenly distributed. Though there is an interesting twist. Saturday’s peak is at 11am. Sunday’s comes at 7pm. Seems like the classic weekend conundrum – get up and get things done or procrastinate until Monday is threatening. While we can rationalise the weekend drop-off, a more interesting take on the data relates to “average session duration” – the amount of time people spend on their council website. We wouldn’t have expected any difference between weekday and weekend, but that isn’t the case. Not only do people visit the council website much less frequently on the weekend, each session takes considerably less time on Saturday and Sunday. An average weekday session lasts more than 20% longer than sessions on the weekend. What stays constant is the bounce rate – the percentage of users who leave after visiting 1 page – which hovers around 50%. This could well suggest that council websites are getting better at directing the user to the right location on the first try, rather than forcing them to search through many pages to find what they want. We were also curious to discover if there was a difference between women and men. We already knew that women take the lead on digital interaction with the council – 53% of users are women, and women conduct 55% of sessions. The profile of sessions between the genders matches the total – activity peaks in the beginning of the week and dips at the weekend. Where there is more of a pronounced difference is in the average session duration – women appear to be more efficient than men; they spend 10% less time per session than their male counterparts. This wouldn’t be nearly so pronounced if not for 1 day that is a complete outlier. On this day, men spend a whopping 20% more time per session than on an average day. And it’s not an anomaly – roughly half the councils in our sample exhibit the exact same pattern. Which day is it? Hump day. What is it about Wednesdays?